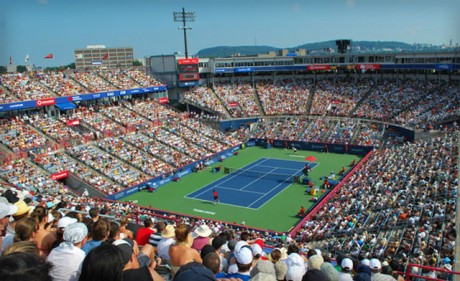 We were so lucky to watch Roger Federer play in the men’s final here in Toronto this year. Majority of Tennis By Dennis players had a chance to go to Rogers Cup and watch their idols perform. Some of them Ilia Dobrovolsky and Victor Galut even played in the Mini Rogers Cup 2014 on modified red courts. Ilia won the title in his U6 age group. That win was as big as Jo-Wilfried Tsonga’s win over Roger Federer. What a week in Toronto !

Jo-Wilfried Tsonga off a stunning week of tennis by defeating No. 3 Roger Federer 7-5, 7-6 (3) to win his second ATP Masters 1000 title at the Rogers Cup in Toronto, Canada. The 29-year-old Frenchman lost just one set all week while defeating No. 1 Novak Djokovic, No. 9 Andy Murray, No. 8 Grigor Dimitrov and Federer to become the first man since Guillermo Canas in Toronto in 2002 to defeat four straight top-ten players en route to a title. The win boosts Tsonga back into the top ten, while Federer drops to 2-5 in finals this year.

Dear Existing and New Clients,   We are open for the Summer camps registration and Summer tennis lessons. Due...

Dear Clients,  With the latest announcement from the Provincial government communicating the reopening of York region into the Red...

We were so lucky to watch Roger Federer play in the men’s final here in Toronto this year. Majority...

In case you are lost or you need help please contact us.